Wall St. Journal: “The Senate health-care bill would raise effective marginal tax rates on lower and middle-income singles and families up to 41%.  The stunning victory of Scott Brown in Massachusetts may prove to be a game-changer for the President’s health-care “reform” agenda. This is good news for the ability of lower-income families lacking insurance to climb up the ladder of American prosperity. His associated rhetoric notwithstanding, the President’s policies in the stimulus bill and health-care debate increase current barriers to the American dream. These legislative efforts (we use the Senate health-care bill for illustration) raise to shocking levels the effective marginal tax rates (EMTR) on lower and middle-income singles and families–with the government taking up to 41% of each additional dollar.” 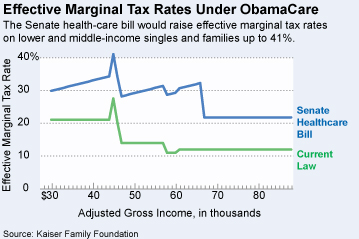